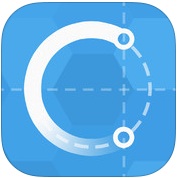 Drawing is the most important beginning for any art project for me (and a skill I am still trying to master), and there are any number of iOS apps out there which have “Draw” in their names. Concepts is perhaps the only serious iPad app that is aimed squarely at digital drawing, as opposed to digital painting. It recently came out with a new version with added features, and I have been using it more lately, so it’s time for a short review.

When I first tried Concepts about a year ago, I wasn’t very impressed, mainly due to certain annoying stability problems on my iPad 4 running iOS 6. (In other words, it crashed a lot.) Since then, all of these issues seem to have been addressed by the developer, and Concepts has become a worthwhile addition to my bunch of go-to apps, and it even functions smoothly on an iPad 2. However, it takes a unique approach to the drawing process which other apps don’t always share: it assumes you’re serious about getting your drawing right, and gives you some very interesting tools to help you achieve that. And while you can use Concepts for casual sketching and coloring, you won’t be producing anything like Van Gogh or Monet with it. That’s not what this tool is for.

Above is a video of a basic walkthrough of Concept’s menus and general capabilities. (Please note: any appearance of lag in the drawing is due to my screen recording, not to Concepts – which is very smooth and responsive on your iPad.) In the most recent update, the paper (background) and size options have been expanded. You can even now use something they call an “infinite canvas,” which means you can start your drawing and then add onto it without ever running into a page margin; a real plus for people (um, me) who have trouble planning their drawings to fit on a page.

One difference between Concepts and other art programs is that they don’t supply a typical color picker. They offer a big color range apparently “sponsored” by Copic and designed to mimic Copic markers. (Sketchbook Pro also has a Copic edition like this, hopefully Copic is getting its money’s worth from this advertising…) But, since the focus of Concepts is drawing, not painting, you may very well not miss the color picker at all. And so far, Concepts is the only art app I’ve come across that automatically creates harmonic palettes. If you pick any shade, you’ll get the option to access mini-palettes of analogous, complimentary, triad or monochrome range of colors harmonizing with that shade. That’s pretty cool. 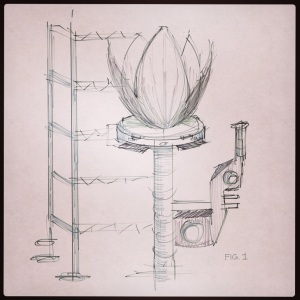 Like 53’s Paper, Concepts doesn’t give you a big range of brushes. Again, that’s not its purpose; it’s an “ideas” sketcher. You get a couple of different ink pens, an airbrush tool, a marker tool (with a pleasingly realistic marker texture), and a pencil tool. (Unlike Paper-53, you don’t get a watercolor brush.) A good pencil tool in the iPad world is hard to find; most of them just don’t feel “real,” no matter how much you fiddle with grain and opacity. Concepts has a very natural-feeling pencil tool, and combined with the “heavyweight” paper type especially, is a pleasure to sketch with.

The most unusual feature of Concepts is how it approaches editing and layering. It offers (with the Pro version) a complete “Stroke Editor.” When you make a quick sketch with the pencil tool, for example, and then go look at your layers, you’ll find that all your strokes of the pencil have been individually saved to a layer group. This group will automatically appear expanded in your layer menu, with every single stroke residing in its own sub-layer. (If you’re a loose sketcher, you may be horrified to learn just how many unnecessary strokes you are making when greeted with a layer called “Group, 73 Strokes.”)

On the surface, this seems rather insane and cumbersome. But once you collapse the layer group and clean up the layer menu a bit (hey Concepts, please make this collapsed view the default view?), you’ll realize you can do some cool things with this. Layers (and layer groups) can be moved above and below each other, as you might expect, and opacity can be changed. But you can also use these individual layers to transform every stroke you’ve put down. If you decide Pencil Stroke 73 needs to be brown instead of green, or needs to be done in marker instead of pencil, or needs to be a little longer or shorter — or just plain needs to be deleted — you can use the Adjust function to instantly change it. This works on the group layers as well. (In the latest version of Concepts, you can now touch-and-hold to select and alter individual strokes.)

I do think Concepts could handle this idea better than it currently does. To be honest, it’s a little dismaying that they don’t offer a “dumb layers” option that works like more traditional layering does, in addition to the “every stroke goes on its own layer” option. (Or at least not have every sub-layer pop up in the display by default.) The app claims to “intelligently” create stroke groups for you automatically, but it doesn’t really do so all that efficiently, and takes you out of the drawing flow while you pause to figure out where your stroke was put in what layer, and how you can move it to where you want it to be in the layer hierarchy. (And without the newly added ability to touch-select strokes for editing, editing strokes would frankly be impossible unless you know that little piece of schmutz is on a layer called “Pencil,” just like the other 72 pencil strokes.) The stroke layer feature will delight the careful, technical sketcher, but may disappoint those who are just trying to breezily jot down an idea and make a correction or two. Users should also be given more control over what layers they want to create and when. 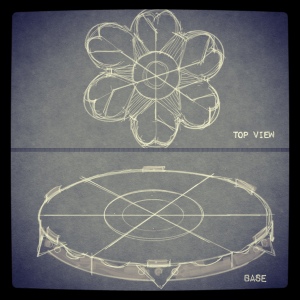 But the real killer feature of Concepts that everyone will like is their Precision Drawing mode. It manages to mimic the action of real-life, paper-based tools (straight edges, French curves and ellipse templates) while not being anything less than intuitive. In precision drawing mode, you can select from several tools (line, ellipse, angle, square and parabolic curve) to easily make those all-important shapes without shaky hands. A dotted guide will appear, which you can pinch to the precise dimensions you want, and then you trace next to the guide, creating your precision shape. You can also use snap-to options in the precision mode as well, which should make technical drawing more fun than it usually is for many people (um, me). And by tracing the shape (instead of having the app generate the shape for you), you are even getting a wee lesson in muscle memory for your drawing.

Concepts invites you to get into a different sort of drawing headspace where you pay attention to the strokes you put down. After I quickly sketched a box, for example, I took a few minutes to slow down and really examine what I had drawn. There were a lot of excess strokes that didn’t help at all. By touching and holding the offending strokes, I was able to delete them, shorten them, or move them, and pretty soon I felt like I was crafting my drawing… which is a good thing. I wound up with a much simpler and more effective drawing… and I learned something too.

Concepts won’t replace your favorite iOS painting app, and maybe not even your favorite casual sketching app, but you’ll probably want it in your toolbox. A free starter version is available (which does not include the full Stroke Editor). I’m using it more and more as a part of projects, and hopefully the developers will make even further improvements.