Can’t believe it’s been almost a month since the Fringe 365 Project finished! Time marches on…

As I mentioned on the About the Fringe 365 Project page, I am keeping room in my routine for more Fringe art during 2014. My new goal for the year is to produce at least one purely speculative piece of Fringe fan art every month. The plan is to release a new painting on the 18th of every month, and in January I’m pleased that I was able to stick to that resolution. Here is the January painting: 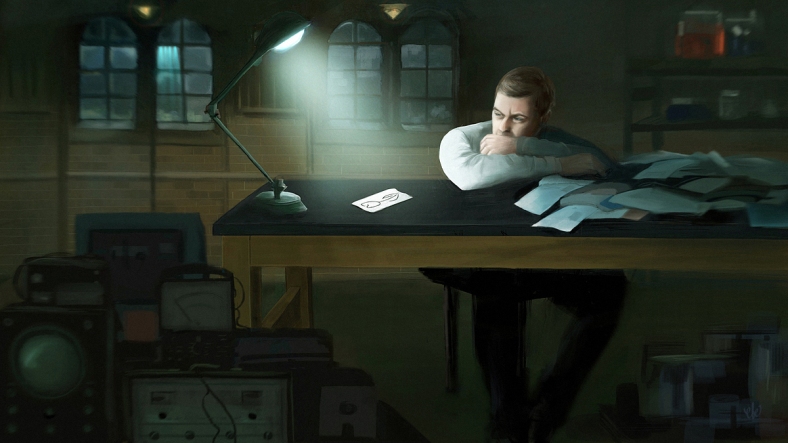 You might recognize this painting as the finished version of a couple of sketches that were posted as entries in the Fringe 365 Project. During the remainder of this year, you’re probably going to be seeing more old sketches and concepts as (hopefully) finished art work. I hope you will enjoy them.

At the end of last year, it was super weird suddenly not having a daily project to complete every day. New Year’s Eve was a strange day of “OMG! What am I going to do with my free time today??” and I admit I felt more than a little sad that the Project had reached the end! However, that feeling didn’t last very long and next day, a new year began all over again and my new art routine did also. It’s been really great to NOT have a daily deadline, being able to plan long-term projects with sensible schedules, and having time to work on my fundamentals and non-fan-art ideas. (Also, my family is probably seeing a lot more of me as well, especially after 6:15 p.m. which is when I would usually disappear!) 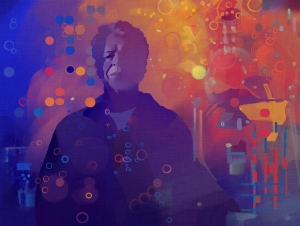 While I am no longer posting Fringe art every day, it’s also been great having extra (ie, “normal”) time during the week to do Fringey stuff as the mood strikes me. I had fun doing a tribute to Walter in “Black Blotter” (which is available as a poster in my Society6 shop) among other things. And I’m currently considering the possibility of collaborating with a Fringe fanfic author on short, limited comic strip/graphic novel.

One last Fringe 365-related thing I did was to create a little book via Snapfish of some of my favorite stuff; just as a personal souvenir of the whole crazy thing! It came out really nice, and I’ve had some people asking about getting a copy, but the version I created had many extra pages and hence was more expensive than I think folks would be willing to pay. If there is more interest, I will look into the possibility of making a shorter version available that would be more reasonable in cost.

Since I’m still iPad app crazy, I wanted to pass on some new discoveries and updates…

I’m using the Moleskine app as a daily personal notebook/sketchbook for my monthly Fringe painting projects. This is an electronic version of your basic Moleskine app, except you can switch out the page types inside the notebooks and export them to your computer. The pages can be lined (you can type on them), or blank, or daily-planner style, or even storyboarding blanks (useful!) And you can of course art all over them with basic drawing and painting tools. I really wish I had had this app last year, because it would have made my life so much more organized. (For some reason, this app has gotten some bad reviews, complaining of crashing and data loss. I have yet to experience any such thing, and I use it nearly every day.)

Photo365 is an app designed for people who want to keep a daily photo diary, but of course it works great for a daily art and sketch repository as well. You can have multiple photos/sketches for each day, laid out in calendar display form, and can add brief notes to each one. This is working really well for me as a daily filing system. (Warning: although you can download it with iOS 5, it crashes frequently on that older iOS. You’ll need at least iOS 6 or above.)

Concepts is an art/drafting app I previously had downloaded but wasn’t very impressed with. Well, they have since gotten their act together and, having corrected some major bugs, put out a product I would recommend. For me, the jury is still out on the utility of their “Stroke Editor” which is an extra in-app purchase. But there are some great precision drawing tools here, and if you need to draw precise shapes or architectural type things, it’s worth a look.

Bezier Expert is a little app that does only one thing – teaches you how to draw Bezier curves (those things with the handles that I can never understand). It’s presented as a little game. If you plan to do any work with vectors (ie Inkpad or Adobe Illustrator, etc) you should check this one out.

Gradiance also is an app that does only one thing and does it well. You guessed it, it merely produces downloadable gradients of all different kinds. For 99 cents you can’t really go wrong here. (I used it for the January painting.)

Error: Twitter did not respond. Please wait a few minutes and refresh this page.