There are 100 days left to the project, which has got me thinking if/how I would like to continue in 2014. Doing a 365 day project has been wonderful for daily discipline, and I really don’t want to give that up. But if anything is worth doing, it is worth (trying) doing well, and you really can’t do any sort of properly finished work in a day, obviously! And in fact, if I want to have anything to post in 2014, I have to start now (because finished paintings take weeks, if not months), so today’s Fringe 365 entry is the beginning of a work in progress, which hopefully you won’t mind seeing again later on, in various stages over time, as it (hopefully) turns into something.

This is the opening stages of a picture of Peter Bishop in the lab, sometime after Walter disappeared, leaving only the mysterious white tulip behind for him to ponder. I’ve started out in Procreate 1.9, which was recently updated with a video recording feature. This is a very nice feature… but unfortunately the makers of Procreate forgot to include an off switch. Which means that elaborate, long-term projects suffer from file bloat, which Procreate users are not very happy about. I understand the Procreate folks are working on a fix for this, so hopefully I won’t have to move this project into Photoshop.

Here is the video of the beginning. You can see all the repositioning and corrections that make Procreate such a great tool to use. The drawing is created in several layers, and I use different colors so I don’t get my various elements mixed up. When they are positioned where I like, I merge the drawing layers and change the color to black.

I am very probably not going to frame the final picture as a mid shot like this. But because I’m not sure how close up on Peter this is going to be, I’m starting the composition well out from the focal point. 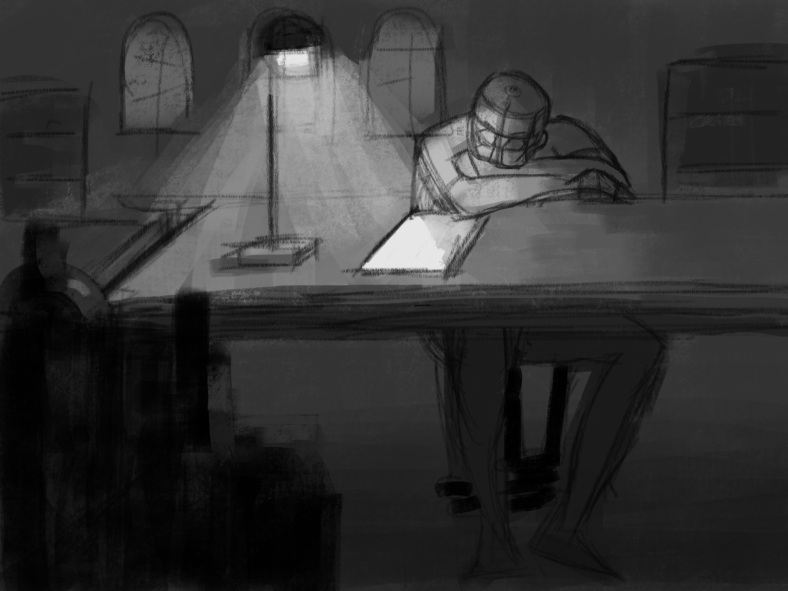 The next step is a basic value study. I am using a neat Procreate add-on brush from the “Nikko” set to block in the lights and darks. The most important thing is to establish the light source (the desk lamp) and what the light falls on. The whole point of doing a study is to “think on paper” and discover where the light falls. This is just the beginning. As more details to the scene are added, the values will have to be adjusted again and again. The ultimate goal is a very detailed grayscale picture that will undergo a careful coloring process.

As for Peter, he is just a faceless hunk of form right now, and his entire head might be painted in a separate file at a later stage and imported in. (You know, like what the Observers did with Simon’s head. I’m sure they were going to put it back on his body in due time)

In time, the lines will be refined many times, and erased or kept depending on whether they help the picture or not. Here is a look at the values without any lines.